Travel safely… with your data

Nico is 56 years old and lives in Belgium. He is a security officer employed by a company active in maritime transportation. He of course uses his computer daily both for his work and during his leisure time. Beyond social networks, he has also downloaded a number of Apps on his mobile that he regularly uses, such as an App to perform his banking operations or to plan his weekend treks.

As a security officer, he is also very much aware of the security and privacy issues and is thus very selective when adopting an App on the App store. As he uses his mobile phone for many different purposes, he has chosen a good quality mobile with sufficient memory.

He has for 4 years experienced chronic ischemic heart failure and atrial fibrillation. Nico is regularly followed-up at the outpatient clinic of a university hospital where he undergoes twice a year numerous exams such as an electrocardiogram (EKG) and blood tests in order to anticipate any exacerbation. Every year he also needs to pass a number of other tests such as an echocardiogram, cardiopulmonary exercise testing and 24-hour Holter monitoring – a small, wearable device that keeps track of Nico heart rhythm- together with cardiological consultation.

Up to now Nico had never thought about using his mobile to store his medical data and was rather suspicious about using Apps which would require him to provide details about his health.

The company of Nico has important new projects in Greece and asks Nico to work there for a period of 6 months. Nico is excited about this new opportunity but also a bit worried, given his fragile medical conditions.

He decides to consult his cardiologist who reassures him and explains that there are very good cardiologists in Greece and that there is also a good solution available now in order for him to provide all the crucial medical information to a foreign practitioner. Nico has indeed heard about a European initiative to share personal health data or prescriptions across European borders but he is afraid that the system is still a bit in its infancy and will not work in Greece. The cardiologist tells him that he will be fully in control of the solution called InteropEHRate he proposes and that it is absolutely secure. The data will be stored on his smartphone and will be then easily sharable (in local language) with a doctor in Greece. If the doctor in Greece does not know the system, he will only have to provide him with the name of the App and he will be able to download it. If the system is already known and installed in the hospital where he would go, that it will then be even easier. Nico says that this looks like a very good solution and that he would be happy to adopt this system. The cardiologist hands him a brochure which provides him with all the details. He says that his medical data including, medication list, last exams and lab results and today consultation report will be shortly ready to be transferred to his smartphone.

Once back home, Nico downloads one of the Apps that has implemented the InteropEHRate protocols (such as Andaman7 in Belgium for example) and validates his link with his reference hospital. He also validates that he understands that the data are stored in the memory of his smartphone and that he will decide what and with whom he will share those data. Nico needs also to confirm that he understands that his data are protected (encrypted) and that they will not be readable if he came to lose his smartphone. The next day, he opens his App and is very happy to notice that all data from the hospital are now available within his Andaman7 App.

Nico moves thus to Greece but after a little while, he progressively complains of mild lower limbs oedema, dyspnoea, and reduction in exercise tolerance. He decides thus to pay rapidly a visit to a Greek cardiologist. He consults his InteropEHRate compatible APP and sees that a hospital nearby is also using the InteropEHRate solution. He books then an appointment to the hospital.

In presence of the Greek cardiologist, Nico will establish a Bluetooth connection between his App (called here an S-EHR -Smart Electronic Health Record) and the application used by the doctor. He authorises the healthcare professional to access all elements of his health data. Within minutes, the cardiologist has received all the data[1] and decides to view only his patient summary and the last cardiology visit report. He can now read most of Nico’s most important data translated into the Greek language. The doctor measures vital signs, body weight, blood pressure, pulse, respiratory rate, SpO2[2], Temp, AVPU[3] and alertness. He recognizes a relevant gain in body weight. He also observes signs of increased interstitial congestion. In the summary of prescribed drugs of the patient, he also reads about a previous attempt to titrate sacubitril/valsartan, which had failed because of the deterioration of renal function. After complementary exams, he decides then to initiate a low dose of diuretic (furosemide 25 mg). He reassures Nico that there is nothing serious and that the parameters are fine. With the prescribed medicine, he should feel soon much better. All the data of the visit and the prescription are then securely transferred on the patient’s mobile App. Once Nico has left, the doctor has no access to further, additional information available on his smartphone.

Nico is indeed feeling much better and no other incident happens during the rest of his stay in Greece. Once back in Belgium Nico is able to similarly exchange the newly collected health data with his usual cardiologist.

[1] Alternatively, the cardiologist may decide to download from the S-EHR App only the data he wants actually to see

[2] SpO2 stands for peripheral capillary oxygen saturation, an estimate of the amount of oxygen in the blood

[3] The AVPU scale (an acronym from “alert, verbal, pain, unresponsive”) is a system by which a health care professional can measure and record a patient’s level of consciousness 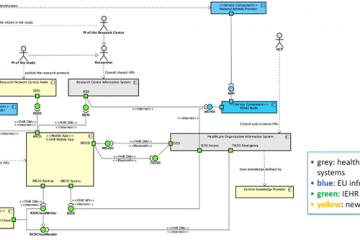 InteropEHRate solutions draw on a citizen-centric approach to overcome the caveats posed by the healthcare-centred model. Through their mobile devices, citizens are in control of their personal health data and able to share it with Read more… 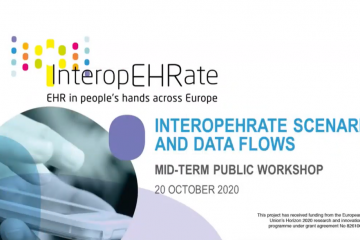 In October 2020, InteropEHRate organised a Public Workshop to disseminate the progress made on health data sharing during the first half of the project and receive feedback from 115 experts and key stakeholders.    Two Read more… 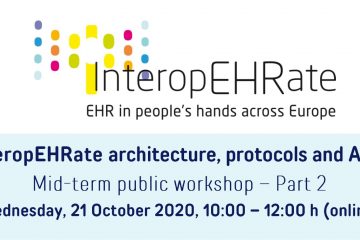